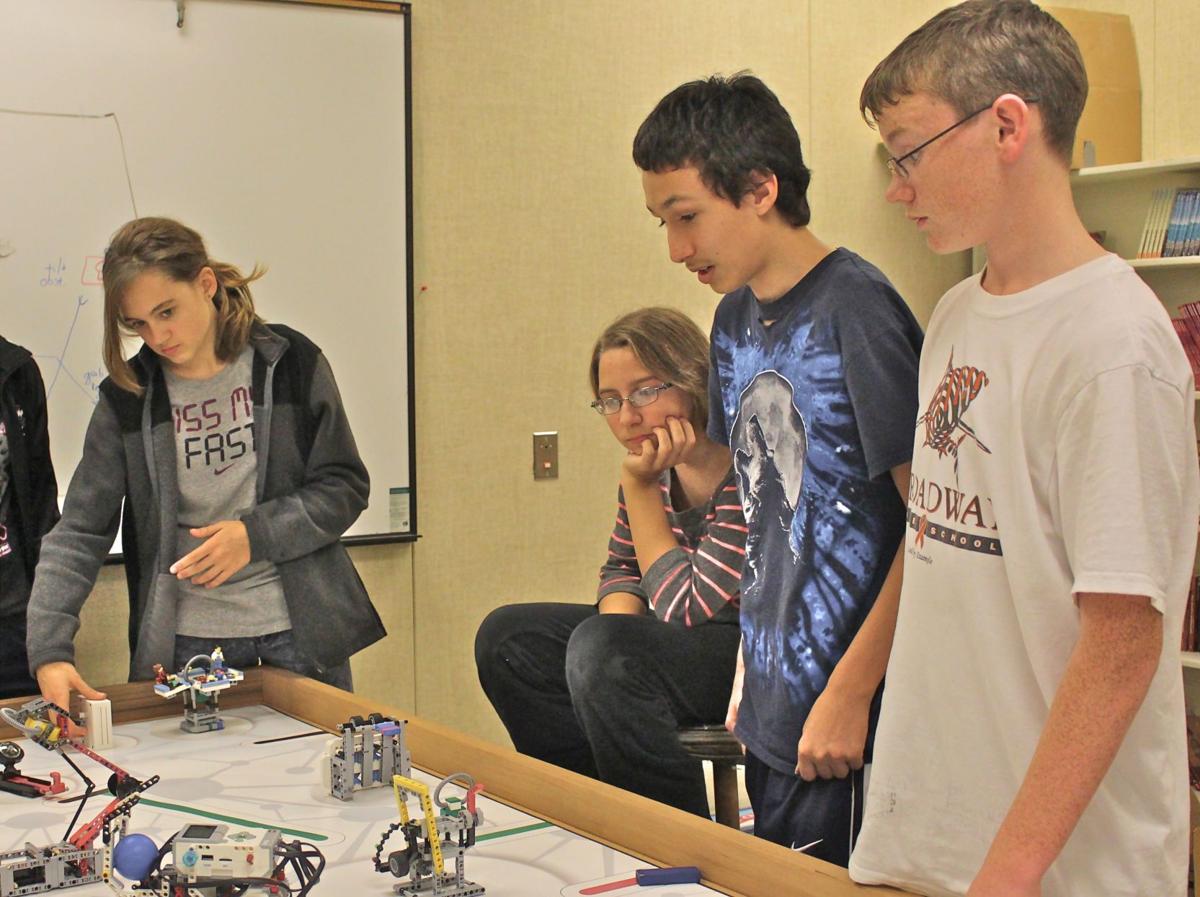 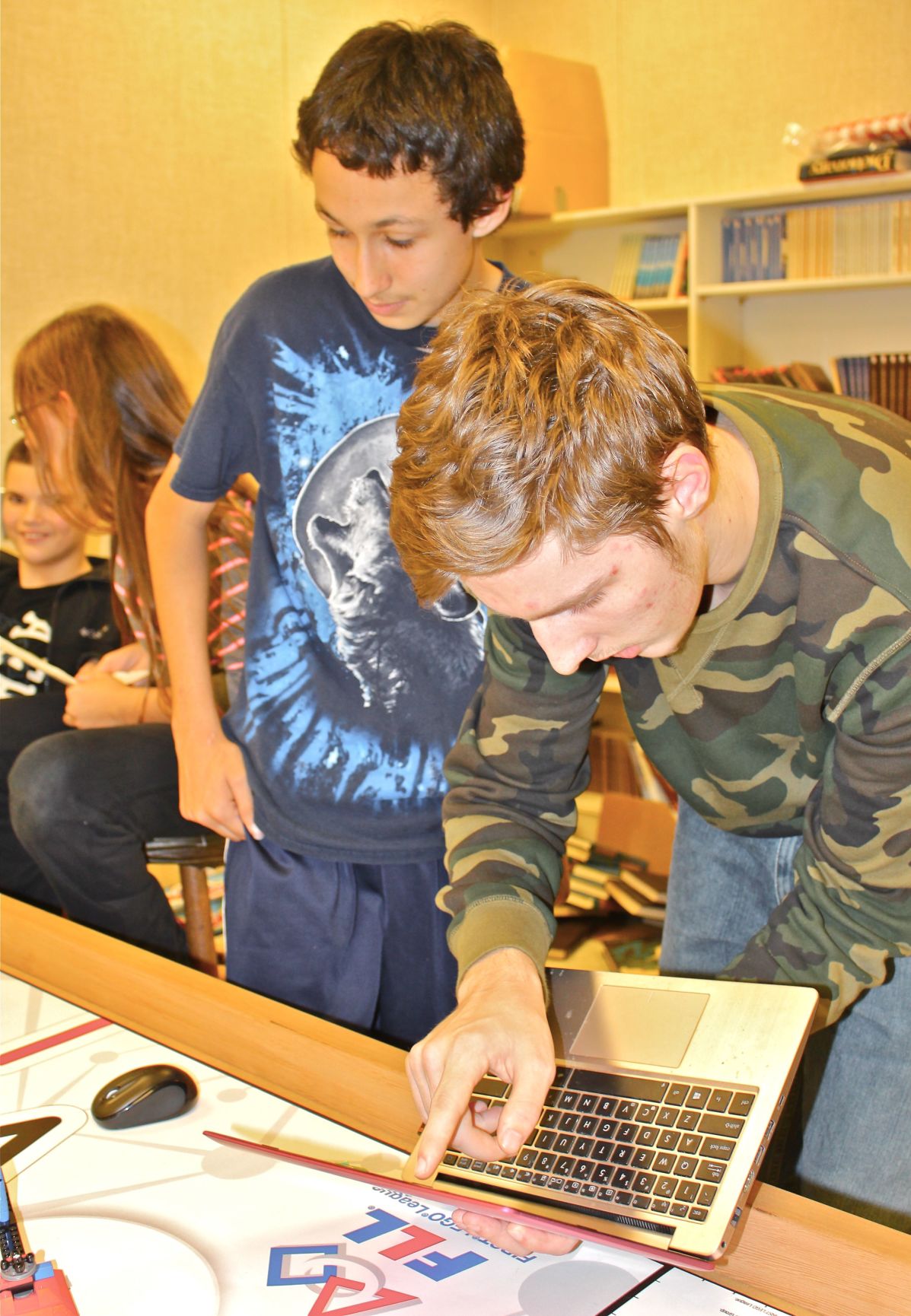 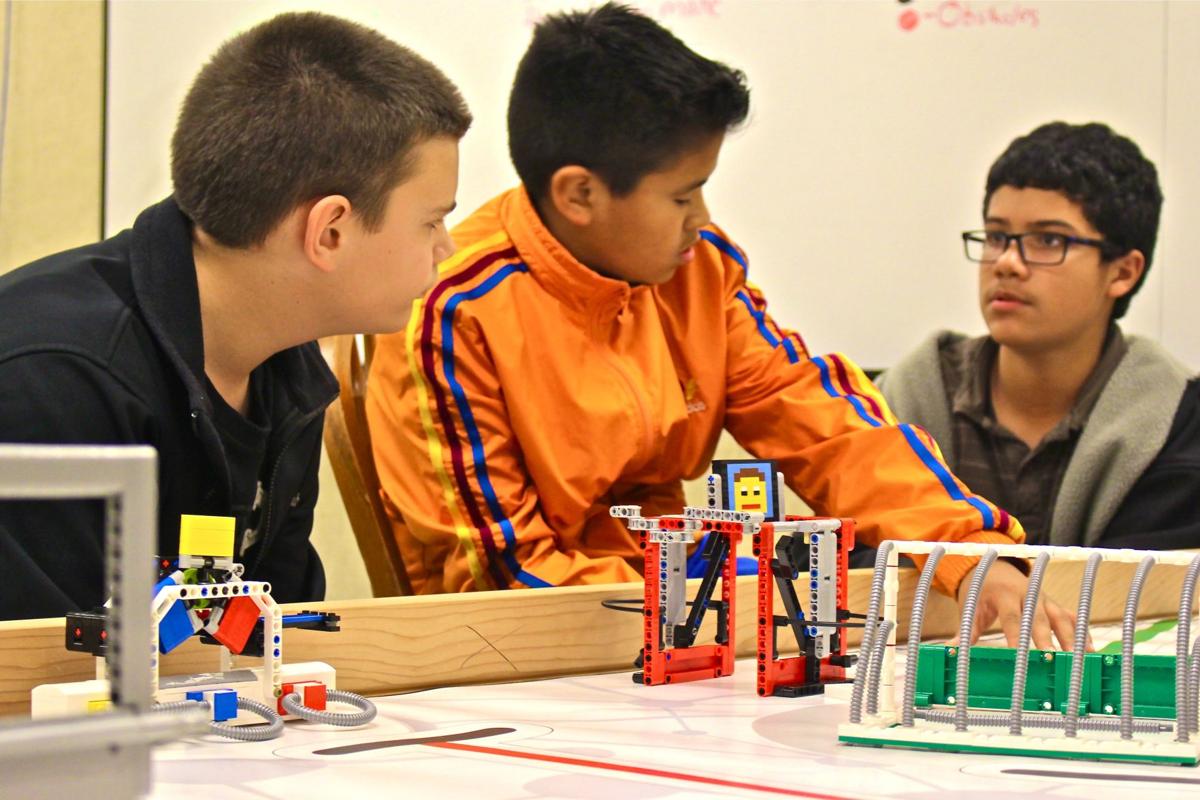 Broadway Middle School students, from left, Gaige Cozart, Jesus Campuzano and Francisco Rojas discuss how to improve their robot and program before the upcoming qualifying tournament. The students are three of nine members of the middle school's LEGO robotics club that started this school year.

Broadway Middle School students, from left, Gaige Cozart, Jesus Campuzano and Francisco Rojas discuss how to improve their robot and program before the upcoming qualifying tournament. The students are three of nine members of the middle school's LEGO robotics club that started this school year.

Students could read about engineering, software and programming in a book, but there’s no better way to absorb material than applying knowledge and doing a hands-on project with a robot, says Broadway Middle School teacher Pete Cochran.

That is the opportunity provided in the middle school’s Lego Robotics Club, which was created this school year with a $1,000 grant from the Oregon Robotics Tournament & Outreach Program.

The club will participate in the Intel Oregon FIRST Lego League (FLL) 2014 Qualifying Tournament in Hillsboro on Dec. 6. As with the rest of this first season, Cochran and Seaside High School mentors Austin Milliren and Riley Olsen see the competition as another learning experience for the students.

“We’re really taking this year to learn what FLL wants, so they can be more prepared for next year,” Milliren said.

Cochran agreed the club has a separate goal from competing during this first tournament.

“It really opens their eyes that there’s a bigger world of people who are interested in the same things they are,” he said.

The robotics club started this semester with a single student, but interest has grown. The school will take a nine-member team to the competition, along with Milliren and Olsen, members of the high school’s robotics club who are assisting the club for their Pacifica Projects.

The club format differs from the high school’s robotics program, although it still involves engineering and programming, Olsen said. He feels it prepares the middle school students and gives them the mental building blocks to take with them to high school in the same way the high school program prepares students for college and careers.

Students put together a game board from a kit. From there, they had to write a program for their robot to complete a series of tasks or challenges, such as opening doors, picking up and releasing items and turning pinwheels on the game board. Although the club started at the beginning of the school year, it got its robot only about a month ago, so, in the meantime, the high school mentors have been showing students how to work with Lego Mindstorms, the FLL standard for programming.

“As a first-year team and how late we started, I’m really proud of the students,” Milliren said.

At the qualifying tournament, each team will participate in three robot performance rounds on challenge tables. Each round lasts 2.5 minutes. The teams will be scored on how many of the 14 challenges they can complete in the time limit. Teams also will have three 10-minute interviews with a panel of judges when the judges will ask questions about the team’s project, core values and robot design aspects of preparing for the tournament.

The core values, described as the cornerstone of the FLL program, say: We are a team; we do the work to find solutions with guidance from our coaches and mentors; we honor the spirit of friendly competition; we display gracious professionalism and cooperation — which means displaying kindness and respect in the face of competition — in everything we do; and we have fun.

As part of a first-year team, the Broadway Middle School students will be approaching the competition as an opportunity to perform their best, observe and meet other students. They will discuss what they learned and how to approach the competition next year, said Cochran and the mentors.

The club can start off the next season with a robot — instead of obtaining one halfway through — and students with at least a year of experience.

School budgets and revenue sources can impact team performance. Broadway Middle School used its $1,000 grant to purchase the robot, game board kit, registration to the tournament and other costs associated with the competition. Cochran said he also put out money for the program.

He believes, in order for science, technology, engineering and mathematics-related activities to blossom at schools, the federal, not just local, government will have to invest in the necessary materials.

“If the country wants us to get ahead in science and math, they have to commit” to funding and supporting relevant programs and activities, like robotics, he said.