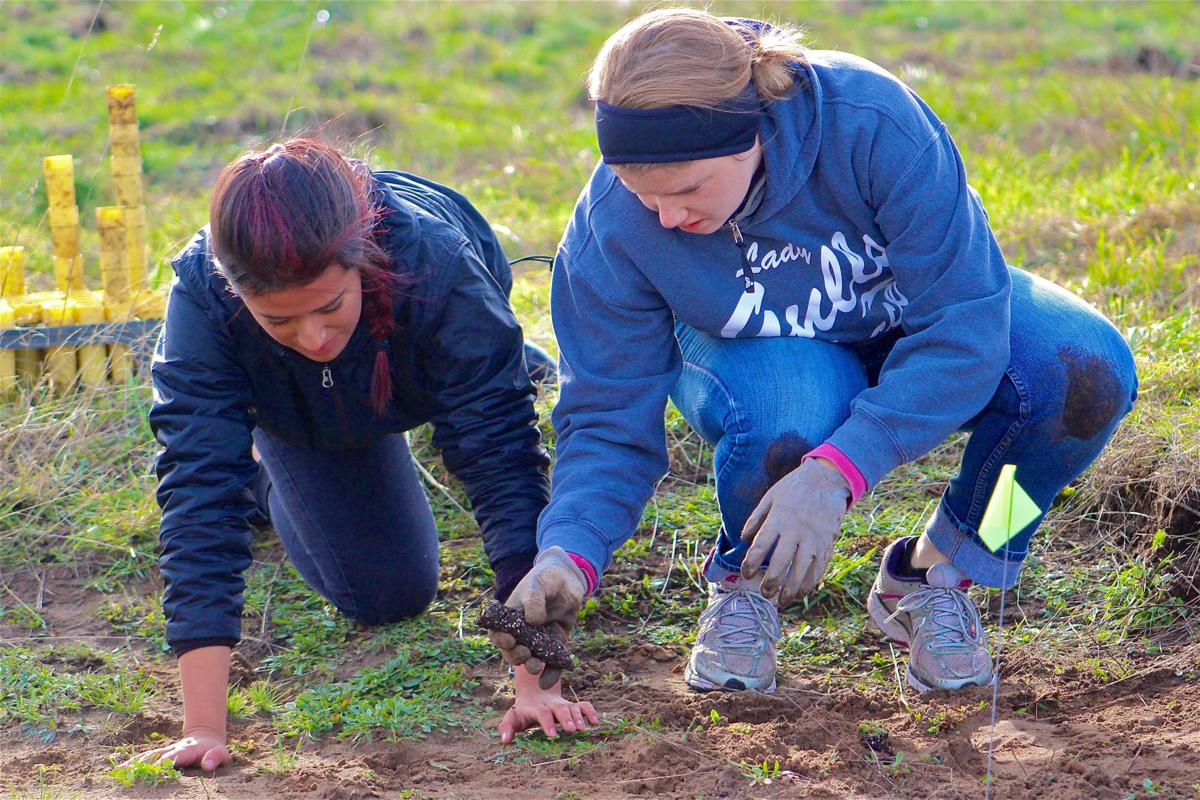 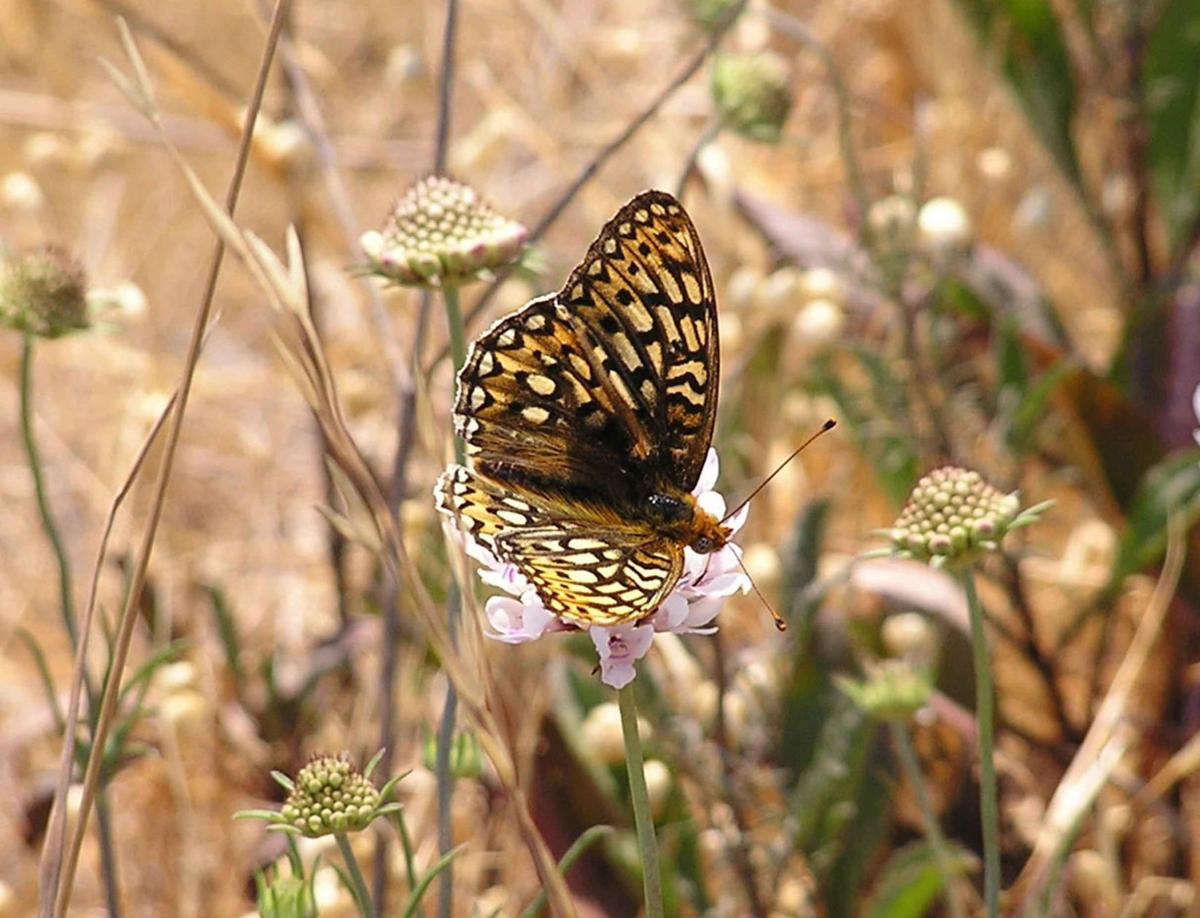 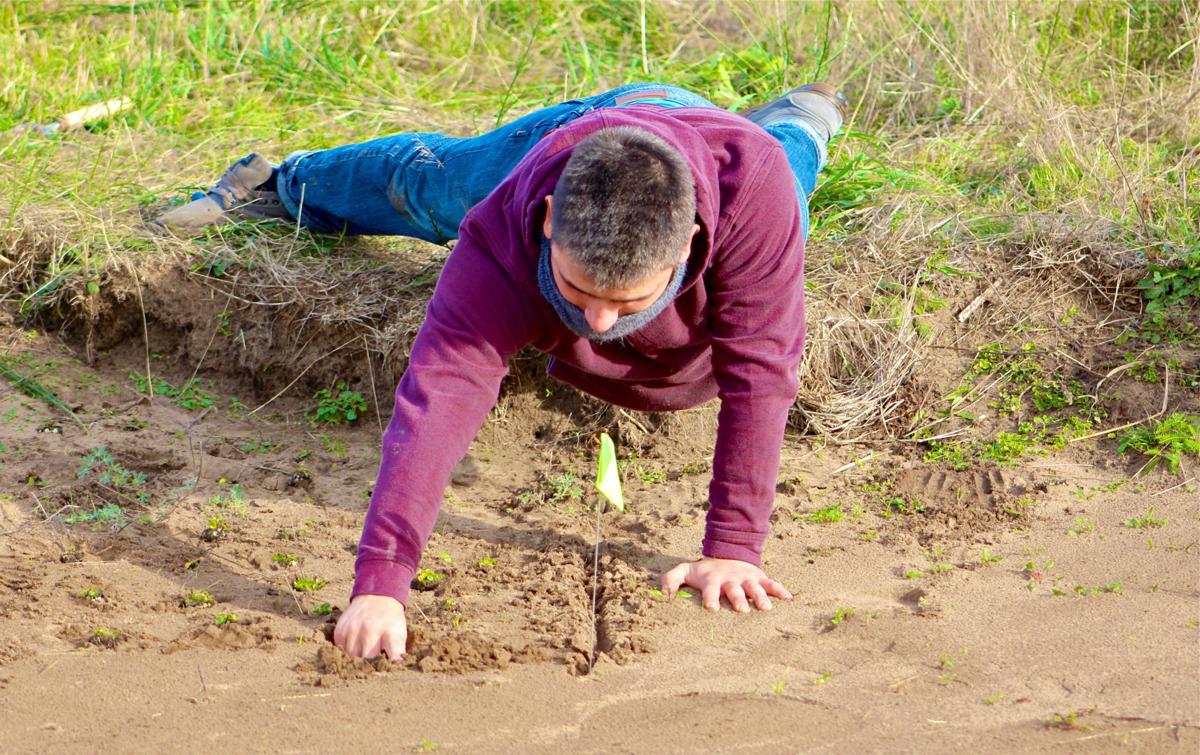 Seaside High School student Nathanael Ward gets creative to plant an early blue violet while not trampling one of the North Coast Land Conservancy's test plats at Reed Ranch during a community violet planting event Nov. 20. 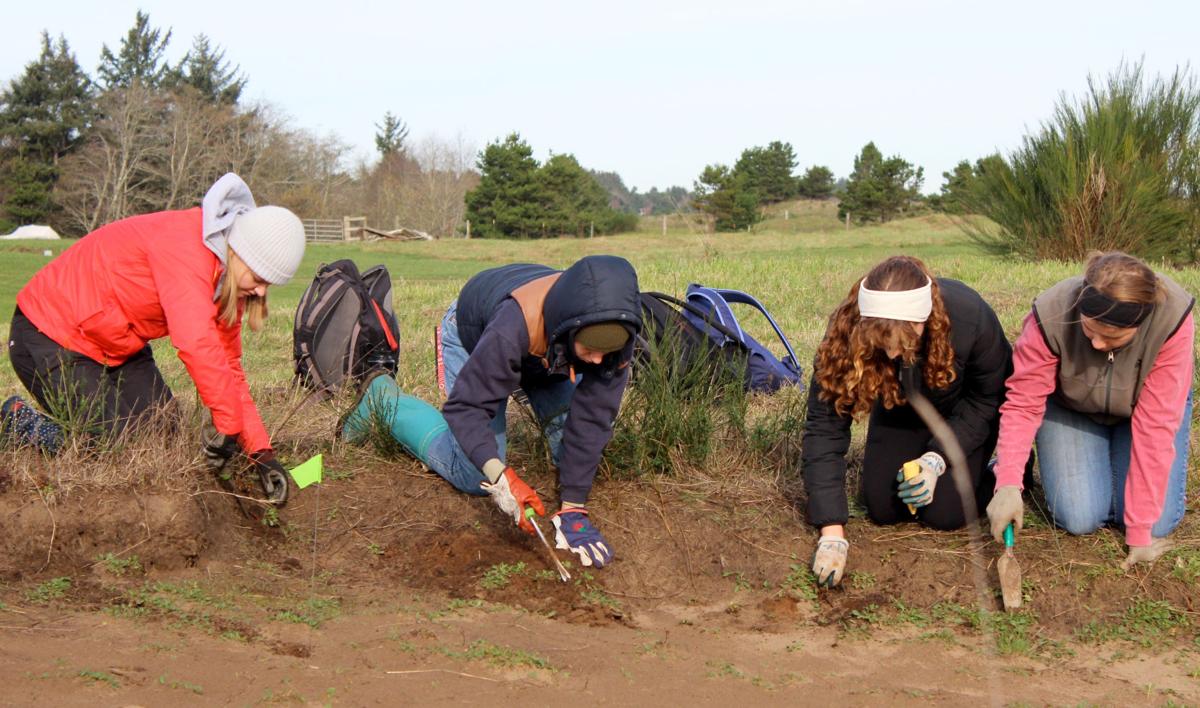 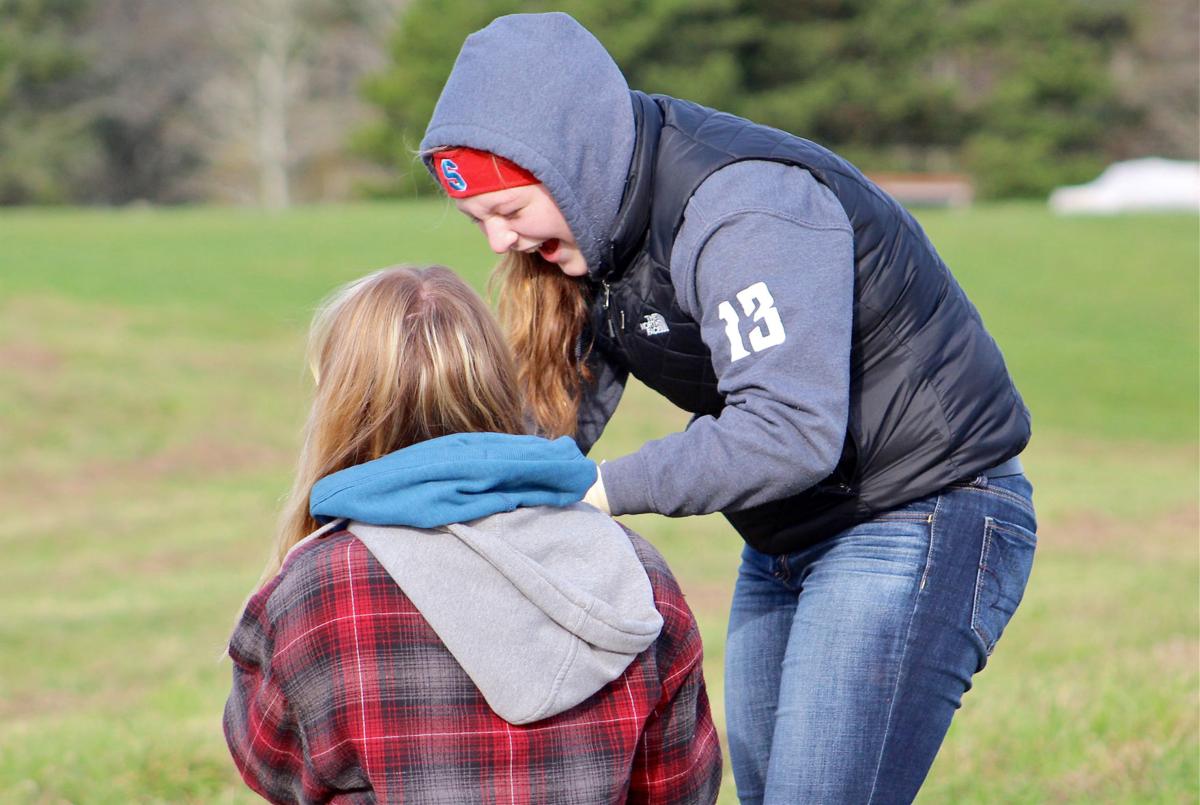 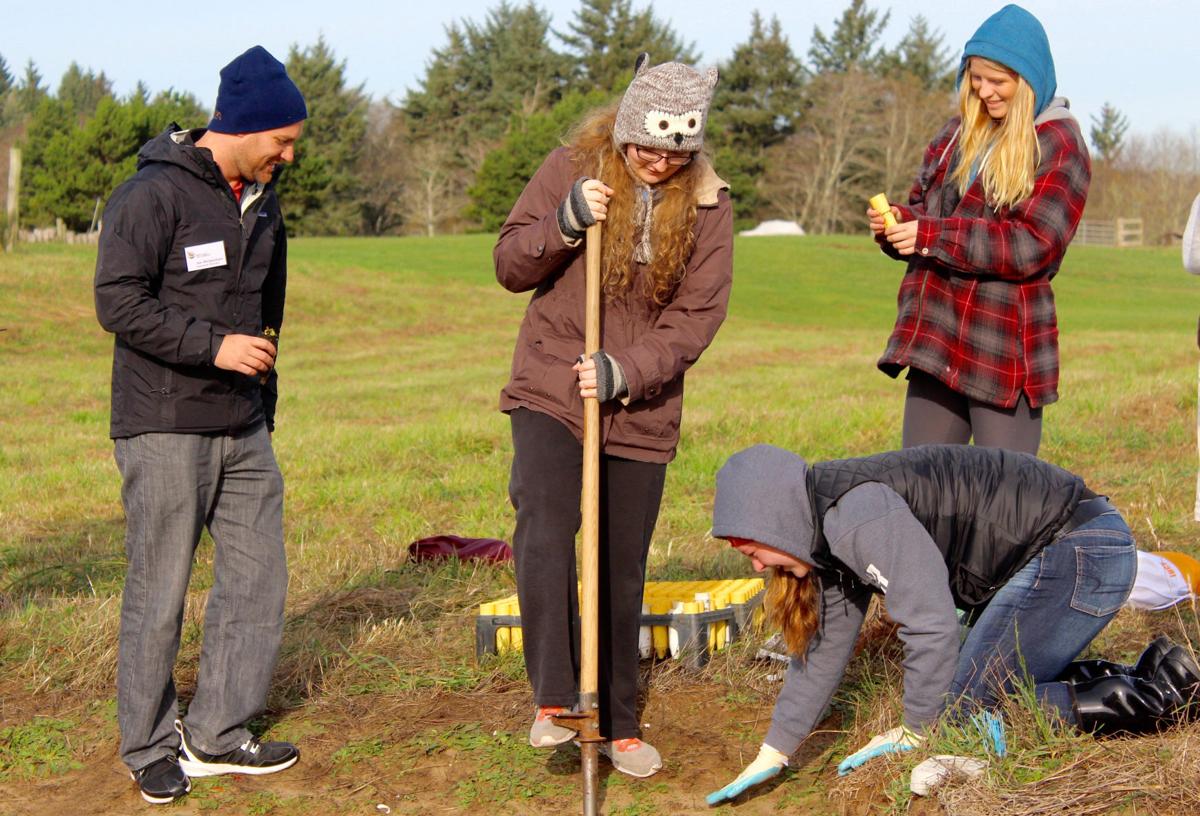 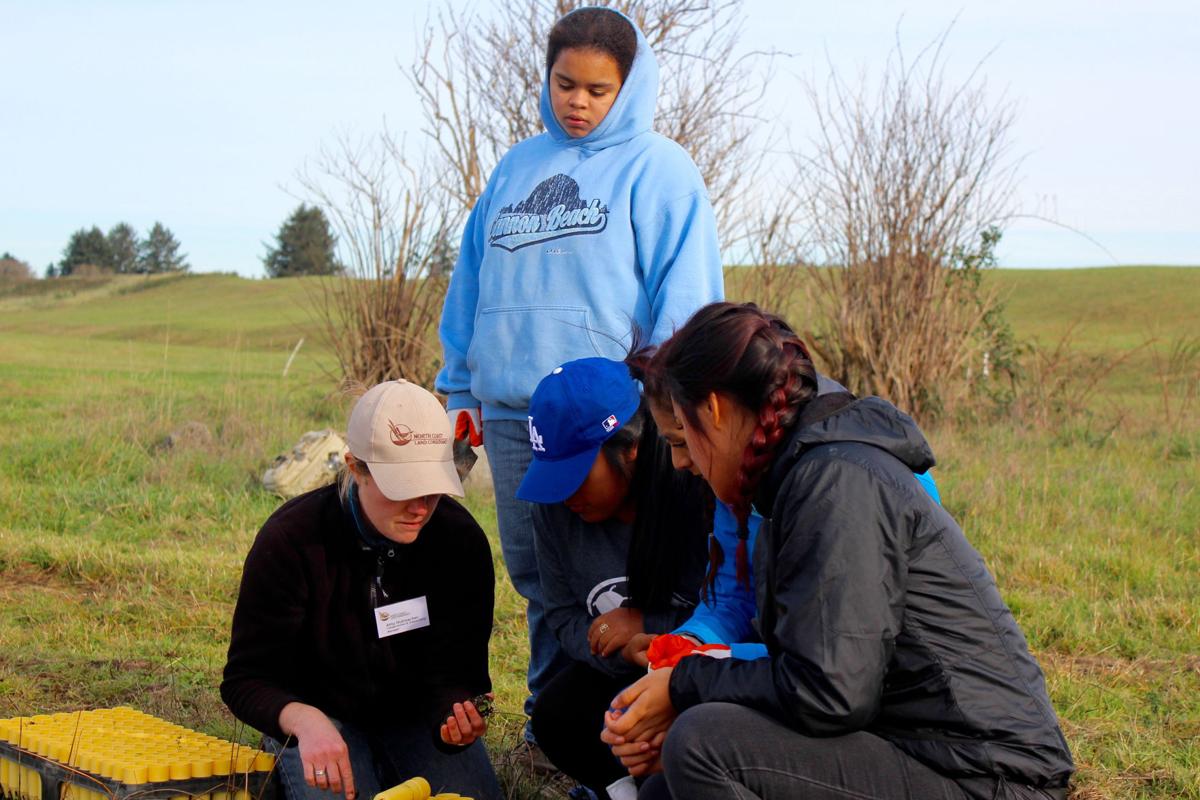 Seaside High School student Nathanael Ward gets creative to plant an early blue violet while not trampling one of the North Coast Land Conservancy's test plats at Reed Ranch during a community violet planting event Nov. 20.

CLATSOP PLAINS — About 9,000 early blue violet seedlings, native to the region, found a new home ­— or rather, returned to home — at sites across Clatsop Plains, assisted by volunteers from local communities who helped the North Coast Land Conservancy during the organization’s two-day violet planting event recently.

Planting the flower seedlings was the latest chapter in the conservancy’s decadelong quest to restore a prairie habitat on the Clatsop Plains and Long Beach (Wash.) Peninsula that will bring back a robust Oregon silverspot butterfly population, which is listed as threatened under the Endangered Species Act. The diet of the butterfly larvae consists entirely of dried violet stems and leaves.

There to get the violets into the ground were nearly 90 volunteers, including about 20 students from Seaside High School’s National Honor Society and art of ethnobotany classes. Community members joined in from as far away as Newport and Lincoln City, with only a few repeat volunteers between the two days.

The early blue violet shoots were developed from seeds collected since 2006 at Camp Rilea and elsewhere on Clatsop Plains. From there, seeds were taken to the Natural Resources Conservation Service’s Plant Materials Center in Corvallis to be planted. When the seed pods reached maturity, the center gathered the flowers’ scattered seed to make a stock of more than 16,000 seeds.

“We keep the seed from the different regions separate because the habitat and conditions are different,” Reich said. “Our violets need to thrive in very sandy soils and coexist with all the other native dune prairie plants in the area.”

In 2014, a bag of Corvallis-grown violet seeds was sent to the North Coast Restoration Partnership’s temporary native plant nursery in Tillamook. A group of young men from Camp Tillamook, an Oregon Youth Authority facility, filled thousands of plastic plug containers with seeds.

The seedlings spent most of 2014 and the winter of 2015 at the nursery, where they were exposed once again to the coastal environment. In July, the conservancy collected thousands of the burgeoning shoots and brought them back to the organization’s Circle Creek property near Seaside to continue maturing in time for fall planting.

On Clatsop Plains, approximately 9,000 violets were placed at two sites owned by the land conservancy — Neacoxie Forest and Reed Ranch — and one site owned by the National Park Service — John B. Yeon Scenic Corridor. The conservancy is planting the violets into plots treated last fall by an excavator that removed topsoil.

“We waited a year after the treatment to give the little violets an extra year to grow and develop their roots,” Reich said.

Overall, the group had about 16,000 violets. The remainder were planted at the conservancy’s Surf Pines property and are going to be planted later at the Willapa National Wildlife Refuge on the Long Beach Peninsula, Reich said.

The conservancy is in the second year of a five-year North Coast prairie restoration project with the U.S. Fish and Wildlife Service, the National Park Service and Willapa National Wildlife Refuge. The primary goal of the project is to boost the native prairie ecosystem being lost primarily to development, Reich said.

A factor in restoring the habitat is bringing back the Oregon silverspot butterfly population. Clatsop Plains and the Long Beach Peninsula used to teem with butterflies of that species but they haven’t been seen since the 1990s, Reich said. They were listed as threatened in 1980. The closest remaining population is at Mount Hebo. The partners said they believe that is because the environment on those prairie lands has changed. Some violets remain, but not enough to support a robust butterfly population.

“If we can restore the habitat, the U.S. Fish and Wildlife Service will be able to re-introduce the butterfly to the North Coast,” Reich said.

The conservancy is managing the coastal prairie habitat using strategies such as planting native plants and removing invasive species, the most prevalent of which is Scotch broom.

“All of the coastal prairie habitat has been invaded at some level, and we need to keep on top of it because it quickly shades out native prairie species,” Reich said. The group seeks volunteer help for its occasional “broombuster” events.

After the violets are planted into the research plots, the Institute of Applied Ecology in Corvallis will monitor them in the spring and make recommendations for adaptive management. Meanwhile, the group is seeking funding for treatments and plantings on a larger scale, Reich said.