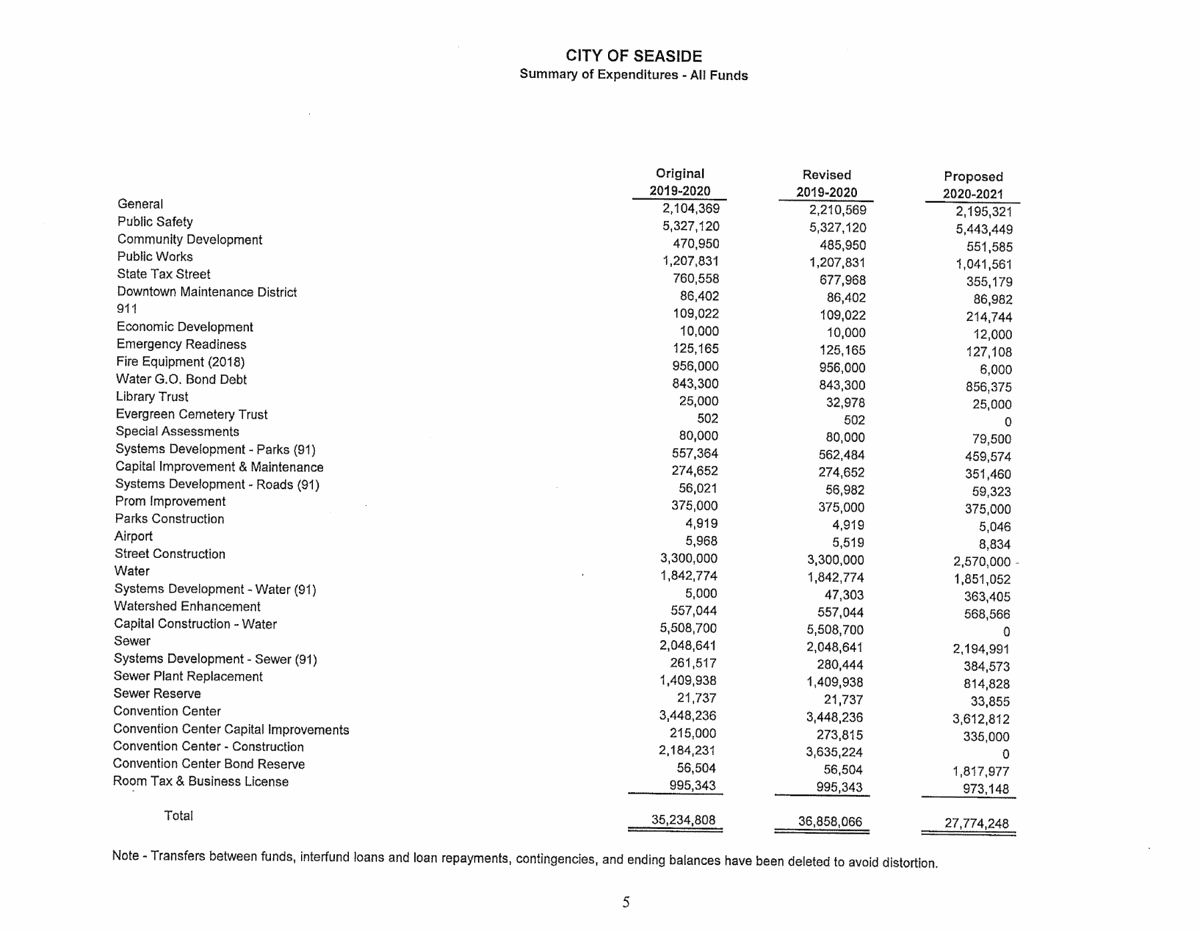 It will be a year of belt-tightening in Seaside.

“These are strange times,” said City Manager Mark Winstanley as he presented Seaside’s 2020-21 budget on May 18. “I have never created a budget with more uncertainty.”

The general fund, which covers the business office, library and community center among other items, will see expenditures of $2.1 million, $20,000 less than last year’s budget.

The public safety department, which includes police and fire, is budgeted at $5.4 million, an increase of more than $110,000 from last year.

Winstanley forecast more uncertainty on the revenue side.

The city expects to receive $4 million in property tax revenue and more than $900,000 in room tax and vacation rental revenues.

Hotels could be looking at 30% to 40% occupancy rates, Winstanley said, “and that’s going to be very difficult for them.”

The city usually anticipates a 6% to 8% rate of property tax delinquencies. This year that number could reach 9%, he said. “Collection rates are always a crap shoot, especially when the economy goes down.”

Reserves will be tapped as needed, Winstanley said.

Committee members heard requests of $83,000 from 12 nonprofits, including the Harbor, Helping Hands and the South County Food Bank.

Looking back at a year in which the city completed the convention center remodel, Holladay Drive utilities and paving, the water tank project at the new campus in the Southeast Hills, City Hall upgrades and a 100-foot-ladder aerial fire truck, Winstanley predicted “next year will be quieter, but not entirely.”

Improvements from Avenue S from Wahanna Road to U.S. Highway 101 will become a top priority, Winstanley said, designed to improve access and handle increased traffic to the new school complex will include all aspects of road and utility improvements, totaling more than $7 million.

The budget must be approved 30 days before the start of the fiscal year on June 30.

The City Council approved a motion to allow the reopening of city buildings at the discretion of the city manager at last week’s emergency meeting.

“I expect they’ll be able to open much like the hotel and motel properties, at different stages and different times,” Winstanley said.

The Bob Chisholm Community Center will have a different reopening schedule, he said, because of the more vulnerable population it serves.

The Seaside Civic and Convention Center will rely on state guidelines before reopening.

The council also unanimously adopted a measure to bring back live board, commission and committee meetings in June, with social distancing measures in place.