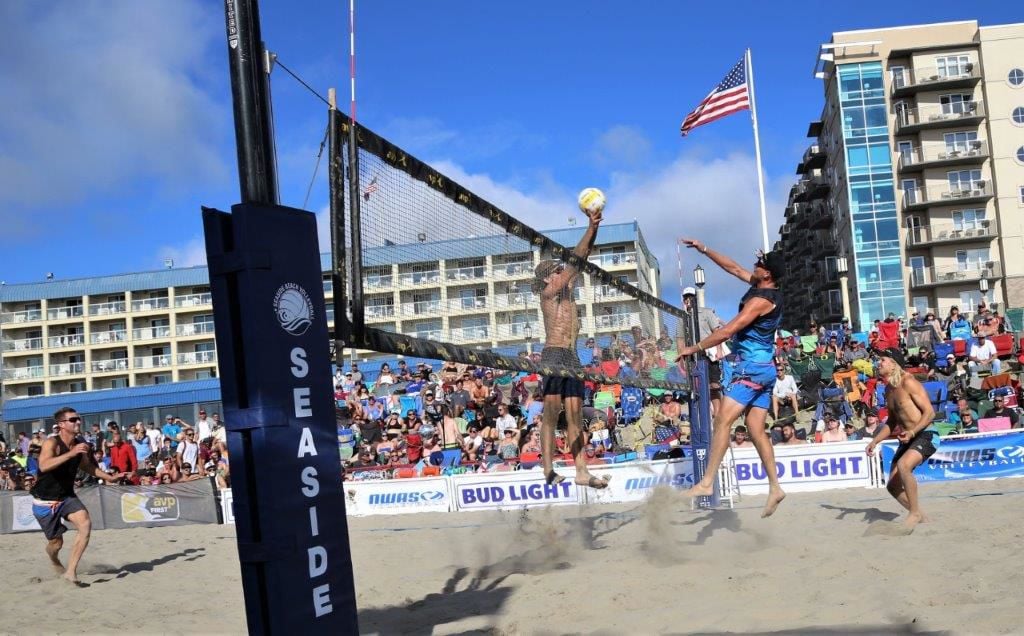 Volleyball action in 2018. This year's tournament is canceled because of coronavirus restrictions.

Spectators and players at the  Seaside Beach Volleyball tournament.

Volleyball action in 2018. This year's tournament is canceled because of coronavirus restrictions.

Spectators and players at the  Seaside Beach Volleyball tournament.

Seaside Beach Volleyball, one the city's largest summer events, is canceled due to coronavirus restrictions.

The tournament, scheduled for early August and organized by the Seaside Chamber of Commerce and AVP America, is the latest in a series of cancellations as a result of the pandemic.

Hood to Coast, the Miss Oregon and Miss Oregon Teen competitions and the Fourth of July fireworks show are all canceled.

Large gatherings and events are not possible until a reliable treatment or prevention is available, Gov. Kate Brown said earlier this month. As a result, sporting events, concerts and festivals are canceled or significantly modified through at least September.

The event is considered the largest amateur beach volleyball tournament in the world.

Sponsored by the AVPFirst and AVPNext divisions of the AVP Pro Beach Volleyball Tour, the tournament contributes to a national pipeline for youth, semi-pro and professional beach volleyball.

Last year, the tournament featured about 1,600 teams playing among three divisions, including doubles, quads and sixes. Organizers put up 184 volleyball courts on the beach, about 20 more than in 2018.

The tournament launched on Sept. 4, 1982, and was sponsored by Seaside lifeguards. It drew 57 teams and 215 competitors from Oregon, Washington state and California.

Lifeguards turned operation of the tournament over to the chamber the following year, under the direction of events coordinator Doug Barker.

The event grew steadily in interest and enthusiasm, with $19,000 in prizes by 2008 and participation of professional quality college-age youth.

In 2016, Bad Boys Open Volleyball partnered with the chamber to oversee organization and management of the tournament.

“We would like to thank all our athletes, partners, and sponsors for all the support and guidance over the past few months,” Owen said. “We are looking forward to seeing everyone on Aug. 12-15, 2021.”